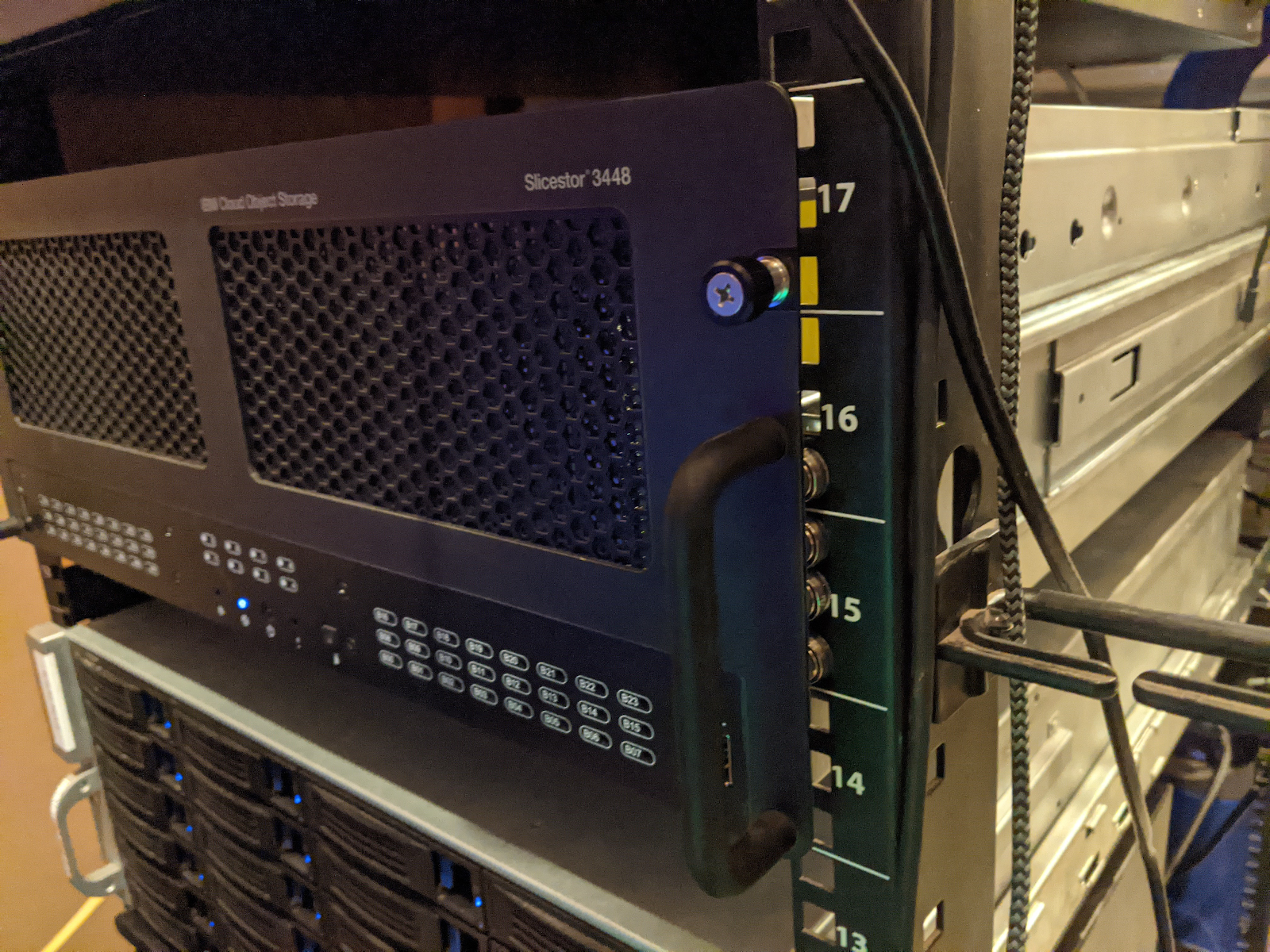 When I first ordered the Slicestor 3448, I wanted to check if it would work as a main chassis just in case.  The first thing I noticed was that my suspicions that this is the Chenbro RM43348 were definitely correct.  I found serial numbers and more identifying this chassis.

I also did a strip down to see what it looked like underneath.  With this I better understood what I was looking at.  There are two backplanes, the Chenbro RM43348 manual identifies these as two SAS3 12Gbps backplanes [1].  I also see 6 mini-SAS ports (Blue), 3 for each backplane, a cluster of fan power ports on the backplanes (Yellow).  There are also a set of toggles for various hardware features built into the backplane (Green).  The backplanes serve as both the direct SAS3 connections and basic power and temperature controls.  To the side of the power connector are plugs meant to control access to the motherboard power and pinouts from the backplane to the front panel connectors on the motherboard and the 6 plug power pins for extra PCI power if necessary (Orange).

There is also a good overview of all the parts in this system in a forum post on servethehome.com [2].  I am merely providing a brief overview of everything relevant to what I am trying to do here with converting this chassis into an expansion chassis.  I don’t feel the need to cover the motherboard, or the front USB connectors, or anything else that would be necessary to actually boot and install an operating system within this. It was dual socket Xeon anyways, which doesn’t match my AMD anyways.

When I first opened the chassis up, I noted it had only 800 watt power supplies and that it only fit low-profile PCI brackets (low profile being 2U chassis sized), and no bigger.  This immediately disqualified this for potentially being the main chassis.  I covered the main chassis build previously. This chassis would have to be an expansion chassis that powered the discs.  This should still be a win overall, as powering extra motherboard, processor, and ram would add quite a bit more power being used overall.

Here is where I had to make a judgement call.  The Chenbro manual is quite technical, and even provides the pinout of the front panel connectors at the front of the backplanes.  I decided to go with the one next to the power management connector.  This is where the motherboard plug was connected to, and also where I have the easiest time seeing and connecting the pinouts.

Here I decided to try to crimp my own wires to connect to the power connector pinout.  I purchased a crimping kit [3].  Figuring that I have striped and worked with wires quite a bit so far in my life.  I even taught myself how to do basic electrical house work, rewiring all the outlets in my house and a fair number of switches.  However, this kit was not of great quality.  The crimps I was able to create did not easily slide over the pins.  The pin would easily strip the attached wire off.  It was just very thin, and the shielding very weak.  The wire was of poor quality.

The thought occurred to me that I should just look for already crimped jumper wires.  Thinking that I cannot be the only one who wants to connect jumpers, I found a couple of wire strips that looked great for this purpose [4][5]. I thus call my crimping kit a mistake I made.  These worked significantly better than the kit could ever have created, had better quality wires and jumper heads.  I was able to quickly connect the pinout below the power management converter to the CSE-PTJBOD-CB2.

With the front panel jumper cables worked out, and the motherboard ATX power identified.  I plugged everything in.  Apologies for the poor quality of the photo.  I did not really capture this point very well.

The biggest issue was that hitting the power button did not work.  I tried several times and nothing, not even the fans turned on.  At this point I was a little frustrated.  I examined the power cable and saw that it had two extra contacts, a 4 and a 2 pin one.  These matched a pinout below the main motherboard connector.  I plugged these back in as I presume I unplugged them myself when I was doing the strip down to see exactly what I was dealing with.

At first I messed this up and missed a few of the pin contacts.  It took a fair bit of work to figure that out.  There isn’t exactly a lot of clearance there to work with.  With these plugged in and I found a 4-pin connector to work with on the CSE-PTJBOD-CB2 that I plugged it into as well.  As a quick aside, there is no manual for the CSE-PTJBOD-CB2 I can find anywhere hosted by Supermicro.  It appears this board is only used in their chassis and not directly.  I read that it could be used this way, but that appears to be a lot of hobbyists getting it to work.

With these plugged in, when I gave the PSUs power, it turned on!  Even the fans worked!  It was a minor success overall.  However, the front panel button didn’t work at all.  I checked, and re-checked the wiring multiple times.  I still don’t see how I made a mistake.  Backup plan time.  I bought a COMeap 24 Pin ATX Red LED Power On/Off Switch Jumper.  I plugged this into the ATX power, and viola!  It worked with an on/off switch.

This is a workable solution, as I could turn the system on and off.  However, I was somewhat unsatisfied with the way this worked.  I would basically always have to have this dangling over the edge in my rack.  In addition I was not able to see the LED lights on the front of the chassis for power.  This is a minor point overall, but it was an annoyance.

Overall though, the thing that kept me working on it was that I really did not see how I had gone wrong on the pinout.  Everything matched the manual.  It should work.  So I took a guess that the problem was either my CSE-PTJBOD-CB2 board, or this board in general.  There was a newer CSE-PTJBOD-CB3 board [6], which was much more fully featured.  It even had a remote management chip built into it.  It also had a manual I could actually use published from Supermicro.  So I bought one.

I was able to plug it in in much the same way as the previous board.  It worked from the get go.  The front panel switch worked, the front panel LEDs worked.  I had the right wiring, the right understanding of the power hookups.  There was one thing I did not get working, though I am sure I could get it working, that was the reset switch.  The front panel pinout from the power management control only had one ground.  I used it for the power on / off switch. I could have easily rigged up another ground or spliced it.  Why would I need the reset switch on this?  There is no software. A power cycle works just the same and uses the power switch.

The next step I wanted to get through was the remote management.  If I had it working, that would make management of this expansion chassis a whole lot easier.  So I tried to login.  It took me a long time to figure out that, on these boards at least, the default username and password is not the standard admin/admin for Supermicro.  It is actually on the board itself.

This is a much improved default.  One of the most common ways security is broken is default username/passwords, by doing it this way, there is not one set of passwords that would work.  My only real recommendation is to please make the manual highlight this better.  I searched the whole thing and didn’t see it.  It is case sensitive and next to the PWD tag on the power supply input.  The username is ADMIN, which is also case sensitive.  With that figured out, I logged in and saw the standard supermicro remote control software.  I was, and still am, ecstatic about this.  It makes remote management so much easier, plus I can verify the basic status of the system, and see the power draw, which it measures as well.

With that taken care of, I have the whole expansion chassis working, with front panel buttons, and remote management.  That was more than I was planning for when I started.  I screwed in the CSE-PTJBOD-CB3 board and wired everything up.  Here is what the expansion chassis looked like upon completion.  I did my best with cable management, and as you can see, most of these are relatively clear.

I am quite pleased.  The space is clear, I’ve wrapped things up decently.

There are a couple more things of note that I did with the chassis.  It may not be completely clear here, but I did replace the native fans with 80mm noctua fans.

This was mostly successful.  I would have preferred to have done two fans in each slot like the system started with.  However, these appear to be specially manufactured to have both fans powered from the same plug.  Something I did not easily replicate.  I could split the power, but there was not space for that within the tight confines of the fan holder.  I just decided that since there is no full system in this chassis, four fans would probably be enough.

This is still in an in progress state, but everything is connected.

At the end, I put on the rails and moved it into the rack.  I considered this a great success.  More than I thought I would get.  I had the whole system booting onto a drive I plugged into the expansion chassis.  The chassis was controllable via front panel and remote management.  The main system was ready for the next step, software installation!